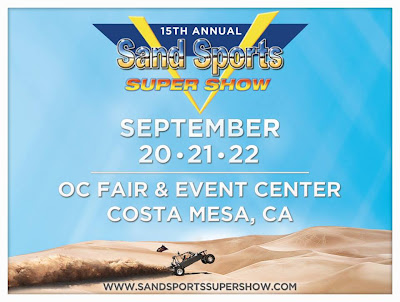 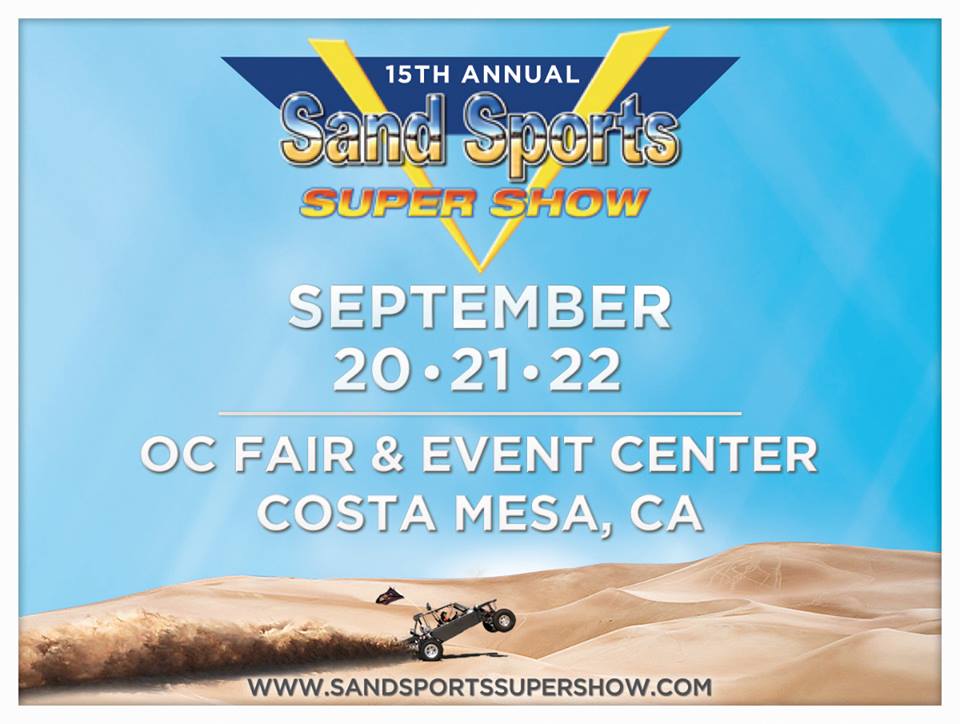 TORRANCE, CA SEPTEMBER 16, 2013: This weekend marks the 15th Annual Sand Sports Super Show in Costa Mesa, CA. The key companies of the Sand Industry gather every year at this event to show off new products, the latest in innovation and kick off the local sand dune season. This years show has an increased number of vendors with all the features of years past, and are proud to announce the inclusion of the Speed Energy Stadium Super Trucks series on Friday, Saturday and Sunday. The Sand Sports Super Show will take over the Orange County Fair & Event Center in Costa Mesa on Friday from 4pm-10pm; Saturday from 9am-7pm and Sunday from 9am-4pm.

“The show has continued to grow again this year, and we are really excited to see the companies come with a different twist on their product lines,” said Shawn Parker. “Every year we look for an added bonus to the show and this year we are really excited to announce that the Speed Energy Robby Gordon Stadium Super Trucks will be racing on Friday and Saturday night, and Sunday afternoon.”

Speed Energy Robby Gordon Stadium Super Trucks will have three shows including Friday from 6pm to 10pm that includes SST Qualifying, Pre-Runner Jump Contest, 1400 Race, Trophy Kart Race and a SST Main event. On Saturday from 6pm -10pm the event will include SST Qualifying Trophy Kart Races, Side x Side Racing, USA-Pro Supermoto and a SST Main Event. Sunday afternoon the weekend will conclude with a show from 12pm to 4pm that will include SST Qualifying, Trophy Kart Race, Sand Buggy Drags, Side X Side Revenge Race and a third SST Main Event. Going into the event, Rob MacCachren is first in the points standings with Robby Gordon in second and Justin Lofton in third.

The American Sand Association, who revealed the Polaris RZR XP 4 900 at the 2012 show, will complete the raffle ticket sales which benefit the ASA and give it away to a lucky winner on Sunday, with a second winner getting a RZR S LE. Tickets are $20, or 6 for $100. Do not have to be present to win, and tickets can be bought before the show on the American Sand Association website.

The Vendor spaces will be packed with UTVs and Sand Cars featuring companies newest products and innovative technology. Chaparral Motorsports has confirmed that they will have their store in Building 16 now called the Chaparral Pavilion. Half will be packed with accessories and gear and the other half lined with Yamaha, Kawasaki, Can-Am and Polaris OEM vehicles.

Tickets for the Sand Sports Super Show are $15 per day or $25 for all three days. Children 12 and under are free for the Sand Sports Super Show. The cost of the Children’s Speed Energy Stadium Super Truck event is $15 for a one-day admission. The best deal for the weekend is a $30 combo ticket that gets an Adult in for both events for the same cost as a one-day admission ticket to the Speed Energy Stadium Super Trucks.

There is an abundance of parking. The Orange County Marketplace is free if you go in through the Sand Sports Super Show.

The Sand Sports Super Show is the largest sand and off road focused consumer show. Visit www.sandsportssupershow.com for information and additional featured entertainment.

For Exhibitor and Ticket Information go to www.sandsportssupershow.com/tickets.html

Become a Fan on Facebook for Daily Updates: http://www.facebook.com/SandSportsSuperShow